The R.D. Parker senior girls and boys volleyball teams are in Brandon this weekend for the Manitoba High School Athletic Association Provincial Championships.

Both teams have round-robin action tomorrow and Friday, with the playoffs coming on Saturday.

Below is the full tournament schedule. 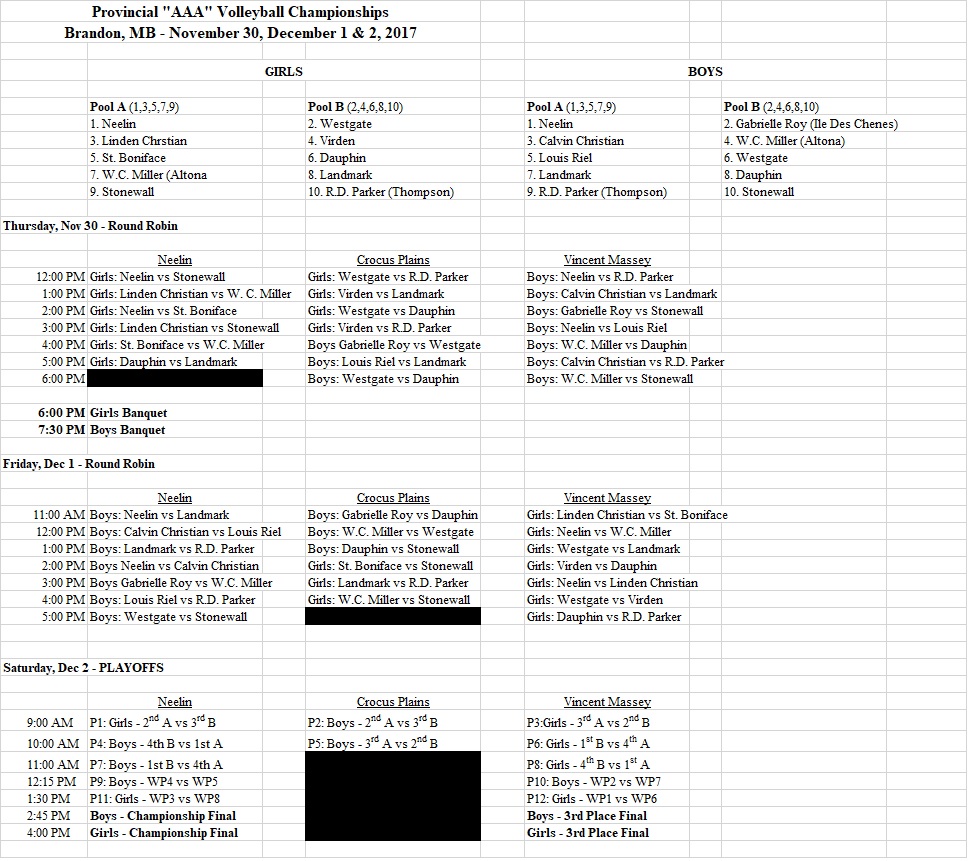 The Norman Northstars are once again coming back to Thompson in search of their first win of the season.

On Saturday, Albert Sinclair had two of the four goals for the Northstars, with Howard and Keistin Saunders adding the other two. Berard, Frederick Ledoux, Jonathan Saunders and Jamie Valentino picked up the assists. Weseen stopped 42 of 52 stops on the night.

Valentino had the loan NorMan goal yesterday, with assists from Howard and Rambow 10 seconds into the second period. The final shot count was 64-17 in favour of the Wild. Tristan Thompson and Winnipeg Blues prospect Luke Seremet each had three goals and three assists for the Wild.

Howard currently leads the Northstars in points with 17 (7G, 10A) in 22 games. Flin Flon, MB native Mitchell Reid leads the team in goals with 9.

The Northstars are at home this coming weekend as they welcome the Central Plains Capitals to the C.A. Nesbitt Arena for a pair of games on Friday and Saturday. Both games will start at 7:30pm.

The Friday night affair, as always, can be heard live on 102.9 CHTM and online at ThompsonOnline.ca.

The Norman Northstars are once again looking for their first win after dropping both their weekend games to the Southwest Cougars.

The Northstars got out to a very early lead on Friday thanks to a goal from Jamie Valentino 13 seconds into the opening frame, but couldn’t hold on. The Cougars equalized close to the end of the first period, the first of six unanswered goals.

The Cougars got out to an early lead in the Saturday night affair, with a pair of first period goals from Rylan Gudnason. The Northstars would answer back with one of their own in the second, but it wasn’t enough as the Southwest Cougars won 5-1. Hunter Rambow had the loan NorMan goal.

Keian Weseen took home defensive player of the game for the Northstars and Rambow took home the award for the forwards. Weseen stopped 42 shots, including 23 in the third period.

The Northstars are on the road this weekend. They’ll face the Eastman Selects Friday, the Winnipeg Thrashers Saturday, and the Winnipeg Wild on Sunday.

The next home series will be December 1st and 2nd, as the Northstars will welcome the Central Plains Capitals to the C.A. Nesbitt arena.

The Norman Northstars had an impressive showing down south against the Pembina Valley Hawks and Winnipeg Thrashers, but are still in search of their first win of the season.

On Friday night, Pembina got out to a 3-0 lead to seal the game, which ended as a 5-2 win for the Hawks. Jamie Valentino scored the first Northstars goal in the second period, and Hunter Rambow added a short-handed goal in the third.

The NorMan squad was night-and-day from Friday to Saturday, as they had a 3-1 lead after one (thanks to goals from Jon Tagoona, Henry Muchikekwanape and Sheldin Howard) and a 5-2 lead after two frames. Mitchell Reid and Lance Bobesko scored for the Northstars in the middle period. Pembina came roaring back in the third, however, scoring their third goal less than 30 seconds in, followed by three in the final ten minutes. The final tally from Saturday was 6-5 in favour of the Hawks.

Sunday saw the Northstars play a relatively uneventful game against the Winnipeg Thrashers, with only one penalty called on both teams during regulation. The Thrashers had a 1-0 lead going into the second period, and a 2-1 lead going into the third. Goals from Muchikekwanape and captain Albert Berard within the first 10 minutes of the final frame had the NorMan squad poised to pick up their first “W” of the season, before Winnipeg answered back with two goals in four minutes. The Thrashers would skate away with a 4-3 victory.

Henry Muchikekwanape currently leads the Northstars with 14 points (6G, 8A), while Mitchell Reid leads the squad with 9 goals.

The Northstars will face off against the Southwest Cougars for a pair of games this coming weekend. Both games (Friday and Saturday) will be played at the C.A. Nesbitt Arena starting at 7:30.

The Friday night affair can be heard live on 102.9 CHTM and thompsononline.ca.